Today is a big day at A Chat Over Coffee! Not only do we have our first ever guest post written especially for this blog, but the author is none other than my seventeen-year-old daughter! Abigail wanted to offer her thoughts on contentment from the perspective of a teenager. The thoughts and opinions expressed in this post are Abigail’s. The only edit I made was to remind her that the blog is known as “A Chat Over Coffee”, not “Mom’s blog”, to people outside of our family. Mothers of teenagers will understand…

Hello, A Chat Over Coffee readers. My name is Abigail, and I am Leigh’s daughter. I believe she’s mentioned me a few times in previous posts. We’ve been discussing her various financial posts as she puts them on the blog, and she’s even had me proofread a few of them to see what I think. Since we’d been discussing it so much, I asked my mother if I could write a guest post for her blog talking about the teenage perspective on financial matters. Because I am her daughter, it’s likely that our views are very similar, but as a young person I probably approach situations a bit differently because my generation has different values and views on money.

A major topic of interest that I’ve noticed in teenage interactions is that of contentment. The atmosphere surrounding children and teenagers is not one of gratefulness. We are pummeled with a barrage of messages telling us that we should be dissatisfied with our lives and that we are not “good enough”- whatever the definition of “good enough” may be. It’s hard to be content in a world where you’re constantly told that you deserve everything you think you want without facing consequences. Having been brought up by my parents to be content and responsible with my money has given me a slightly different outlook on life than a majority of my peers. 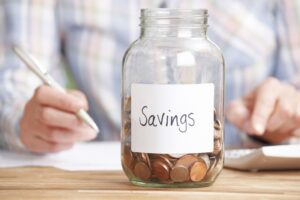 I am not saying this as a way of making myself sound better than anyone else- on the contrary, I insisted on learning many lessons the hard way. However, because I was made to take responsibility for my actions and given a good example to follow, these lessons have stuck with me and affect every financial decision I make. I cannot emphasize enough how much having my parents demonstrate these principles for me has influenced my outlook on life. The world does not teach contentment or the value of patience- instant gratification is the default setting for many people.

Teenagers are notoriously impulsive, and if we are not taught to be content with what we have and to save our money, we will spend it. No exceptions. Even worse, unless we are taught the value of money and the work that goes into earning the money we spend, we will never take care of what we’ve been given. I had a friend who was a chronic smartphone-destroyer, and somehow was always given a new device whenever she broke one. She was constantly treating her smartphone carelessly because she didn’t have any respect for the money it took to replace them. She had not been taught the value of hard work, and as a result, she was costing herself money.

My parents deliberately took a different approach. From the time I was very small, I learned that everything I had took work to obtain. “Nothing in life is free” was a phrase that I heard very often, but I never felt like I was being trained into a cynical view of the world. Rather, what they were trying to teach me was that someone had to work and sacrifice in order for me to have nice things- someone in a factory, a restaurant, or an office worked so that I could have a free sample or a complimentary t-shirt. My mother worked in the kitchen so that I would have tasty meals to eat. My father worked at his job every day because he was earning money to support us. I was constantly being shown what it looked like to work hard and receive the benefits of your work- but at the same time, my parents made it a point to show my sibling and I that we were far more valuable than any material item.

My parents also taught me that I would have to control my money, or it would control me. Unfortunately I liked to learn things the hard way, so this lesson didn’t settle in right away. I remember one instance in particular, where I found a shirt at a store that I wanted to buy. However, I didn’t have enough money in order to purchase it. I decided that the solution was to borrow money from a friend and pay them back once I got home. When my father heard what I had done, he took me back to the store and made me return the shirt and repay the person I’d borrowed from immediately. I was very embarrassed, but I’d learned an important lesson about money: If you can’t afford it, you can’t have it. Period.

From that point on I kept an eye on my money, and I became more aware of how the teenagers around me treated the idea of money. Many of them begged money from their parents whenever they wanted to buy something, or they borrowed from friends with no intention to repay them. Many of them also had jobs and received a paycheck. Despite this constant flow of money, it seemed like they never had enough to buy what they wanted, or even what they needed. Where did the money go? Well, a trip to Starbucks here, an overpriced soft drink there, a trip to the movies or to the mall, and suddenly there wasn’t enough money to buy gas to get them to work the next week.

As I watch my friends continue to handle their money recklessly, I am occasionally tempted to let myself relax a bit. “Why not go to the mall? Why not buy an expensive new outfit? Everyone else is doing it, and they seem to be fine.” But every time I think about letting loose, I am reminded of the patience and firmness of my parents’ instruction. “Give to God first, save for college second, and the rest is yours to enjoy.” “You are the example, not the exception.” I cannot allow myself to pretend that I am ignorant of life’s consequences, because I see their impact every day. I have been taught discipline, and therefore I choose to control my money, not the other way around.

I’m not going to pretend it’s easy. Peer pressure is a crushing weight, and I am aware of it every day. However, if good and worthwhile things were easy, everyone would do them. I would not have learned financial responsibility if my parents had not drilled it into me, because the world does not promote a lifestyle of contentment. Nobody else is going to teach teenagers how to control themselves; as much as we hate to admit it sometimes, our parents are the people we emulate. We may have other role models and important people in our life, but to be honest with you, we are watching our parents and developing life perspectives based on what we see. I don’t think we always realize we’re doing it, but as I’ve gotten older, I’ve realized how much I learned simply from watching my parents as I grew up. They didn’t just tell me what I was supposed to do- they showed me. As Paul says in Philippians, “I have learned to be content whatever the circumstances.” (Phil. 4:11b) I didn’t learn to do this on my own. I had parents acting as teachers and living examples that there is a better way of life than living in the now.