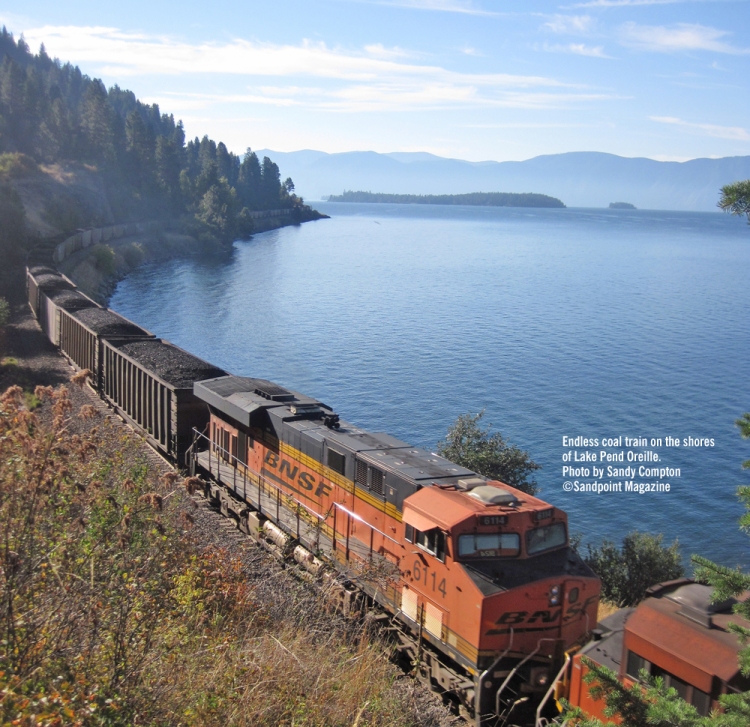 Sandpoint, Idaho is a city built on railroads. While trains historically transported lumber from Sandpoint to Eastern markets, Sandpoint now serves as a point of convergence for trains carrying coal from the Powder River Basin and oil from the Bakken Oil Fields as they travel to terminals and refineries on the West Coast. Recent proposals by coal and oil companies threaten to double the number of coal and oil trains passing through Northern Idaho every day. The proposed Millennium Bulk Terminal in Longview, WA, for example, would export 44 million tons of coal per year, increasing rail traffic in Sandpoint by 18 trains per day. As trains make their way through the Idaho Panhandle, they make a one-mile crossing over Lake Pend Oreille, Idaho’s largest lake. Crossing over this trestle endangers the safety of Sandpoint’s water supply, in addition to the wildlife that rely on this resource. The consequences of increased fossil fuel transports through Sandpoint include the accumulation of pollutants and toxins in the air and water, decreased diversity of local fish populations, increased traffic delays for residents, and a continued economic reliance on fossil fuel production. (Resource:  WIRT Newsletter: Recent Idaho & Montana Oil & Coal Train Issues)

Location: Sandpoint City Beach (turn right off of 1st Avenue in Sandpoint and head to the end of Bridge Street. The Blessing Ceremony will take place on the paved area behind the concession stand, left or east side of the beach).
Time: 9:00 am

Master Carver Jewell Praying Wolf James speaks to a crowd of 120 people along the shores of Lake Pend Orielle during the Sandpoint blessing ceremony of the 2016 Totem Pole Journey.

The Cathedral of the Blue Dome

“We must have a pure, honest and warm-hearted motivation, and on top of that, determination, optimism, hope and the ability not to be discouraged.
The whole of humanity depends on this motivation.”

In every event there are moments of being when you are gifted a silent world inside the spoken word. That was certainly the case at the Sandpoint, Idaho event. It is hard to imagine a more beautiful setting. A sparkling blue lake. A clear, warm morning and a gathering of people who came to share a breath of time under what local environmental advocate Gary Payton described as the “cathedral of the blue dome.”

Over and again, the speakers talked about the power of community to defeat this outrageous and utterly immoral plan to run up to 48 coal and oil trains through Sandpoint every single day.

Shannon Williamson: “As a mother of two children I am standing up to say these trains are unacceptable. And now, many others are stepping up, standing up, demanding to be heard. And thank you, Lummi Nation, for giving us hope, motivation, and optimism.” 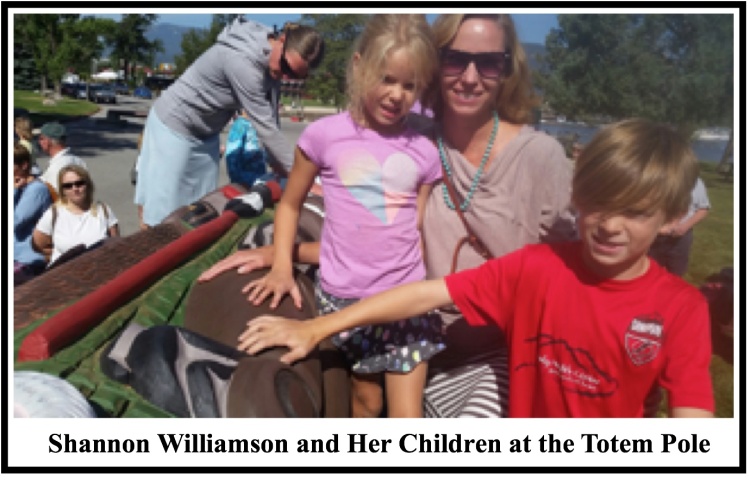 Gary Payton: “Though the Lummi Indians are hundreds of miles away, we are brothers and sisters, all part of the Thin Green Line. We understand that climate change is the great moral and spiritual challenge of our time.”

Rueben George: “They came to one small First Nation Band in British Columbia, the pipeline company. The oil companies offered this impoverished community $1.6 billion if they would sign a pipeline agreement. That is $1.6 million for every man, woman and child. And this poverty-stricken community of 1000 tribal members voted unanimously NO because of their spiritual connection to the ancestral lands that fills and renews their spirit.”

I wonder if the ostensible ‘grandfatherly figure’ Warren Buffett, who is a major investor in Burlington Northern Railroad, would have the courage of his convictions to sit with the Salish Kootenai elder and descendant of Chief Joseph who told the crowd:

I had a dream a week ago about a totem pole. And I wondered why I was dreaming about a totem pole. Then my daughter told me the Lummi were coming here with this totem pole to help us fight these coal and oil trains that threaten our land and water and children and so I am here this morning to say that…It is good you are all here this morning and that this…is amazing . We must all awaken but it is our dreams that bring us together.

“I met Mr. Kinder of Kinder-Morgan the company who wants these pipelines. I met him,” Rueben George said,” and I talked with him. I can tell you, they don’t care. They really don’t. We must stand together and refuse their irreverence and indifference. They are irrelevant to our future.”

~
The crowd included many people from the faith-based community, several of whom spoke at the event. One of the presenters pointed out that the faith community is morally aligned with the spirit and purpose of the journey. The United Church of Christ, the Sisters of Providence, the United Methodists, the Evangelical Lutheran Church, the Christian Church (Disciples of Christ), the Episcopal Diocese of Olympia (Washington), the Evergreen Association of American Baptist Churches, the Episcopal Diocese of Spokane, have stated that, “We stand in solidarity with our Native neighbors to safeguard the traditional lands, waters, and sacred sites…from destruction.”

Master Carver Jewell Praying Wolf James speaks to a crowd of 120 people along the shores of Lake Pend Orielle during the Sandpoint blessing ceremony of the 2016 Totem Pole Journey.

Photographer Lynne Buchanan, who has roots in Florida and has focused on water issues with her work, shares some reflections at the Lummi Totem Pole Journey blessing ceremony in Sandpoint on August 28th, 2016.

Bellingham resident and community organizer Herb Goodwin shares some thoughts along the shores of Lake Pend Orielle during the Sandpoint blessing ceremony of the 2016 Totem Pole Journey. Herb was in town for two events, the other being a kayaktivist protest of the fossil fuel rail shipments coming through Sandpoint.

I am compelled to speak a humble prayer that the collision never occurs, as it would likely cause as much devastation to the beautiful little town of Sandpoint, Idaho (pop. about 7,500) as did the explosion of an oil train in Lac Mégantic, Quebec.

Sandpoint is located in northern Idaho, north of Coeur d’Alene, on Lake Pend Oreille, and only about 75 miles from the Canadian border. Beautiful hills and mountainous terrain surround the townsite, which is located on the west shore of the lake. Pend Oreille is the largest lake in Idaho, 40 miles in length, north to south, and 4 miles wide. It covers 125 square miles, is 1,150 feet deep, and is noted for its Kamloops rainbow trout. The name of the lake is derived from the French name (Pend d’Oreille) for the Kalispel Indians, who wore shell ear pendants. 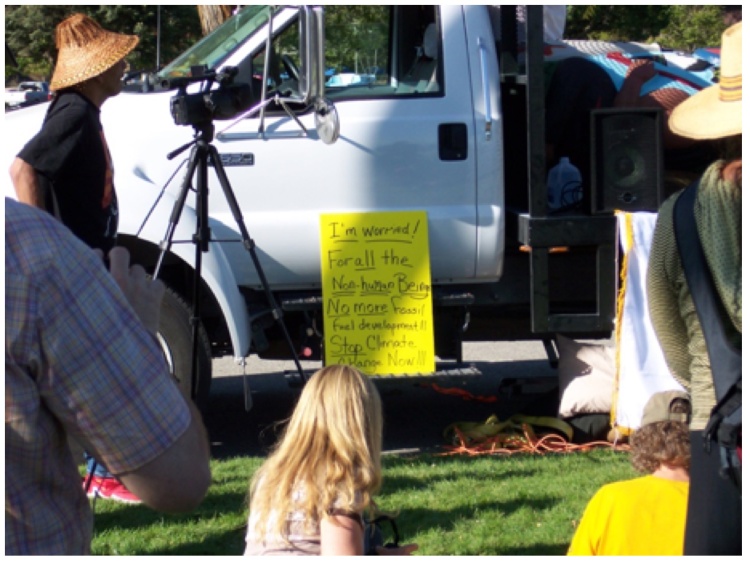 Two railroad companies, Burlington Northern Santa Fe and Union Pacific, own track in Sandpoint and operate trains through the town. Up to 45 trains per day travel through the community, carrying bitumen from the Alberta tar sands, crude oil from the Bakken oil fields in North Dakota, and coal from the Powder River Basin coal fields in southeastern Montana. Empty cars also travel back through Sandpoint to be refilled in those locations. Since 2012, the amount of rail traffic has increased significantly with the more prevalent transport of crude and bitumen by rail, much of which is destined for immediate export.

When we first arrived at the Sandpoint Beach Park, Gary Payton, representing Presbyterians for Earth Care, introduced himself and we spoke for a few minutes. He identified Susan Drumheller and Nancy Dooley of the Idaho Conservation League and primary organizers of the event. He added that Shannon Williamson, President of the Sandpoint City Council and Executive Director of Pend Oreille Waterkeepers, would be speaking.

Nancy Dooley at the Sandpoint Blessing while an empty coal train passes behind her.

As Nancy introduced the event, a northbound empty coal train passed behind her, providing the pointed exclamation mark to our gathering. This was later amplified by Shannon Williamson’s words as her two young children played in a tree nearby, reminding us that this is why we do this: to ensure our children and all future generations have a planet on which they can live, love, and experience creation.

I spoke to Selma Bair, an audience member and concerned citizen who has lived in Sandpoint her entire life and who has perspective on the changes in rail traffic and in the climate in her lifetime, asking her first if she had hope for our future. Her tears flowed as she told me, “We have to have hope.” She also spoke of her long-time neighbor, who was disinterested in coming to the event. When I asked her why she thought that might be, she said, “Because she just can’t be bothered.” How many of your family, friends, neighbors, and work colleagues just “can’t be bothered” to direct their attention to something that actually matters: ensuring climate change does not reach a level that cannot be reversed?

After spirited presentations by Jewell James and Rueben George, we wound up the event with our eyes toward Missoula, Montana for an event this same afternoon. Noteworthy is that Reuben revealed his work with many other people up and down the west coast of North America, from Alaska to California, to form the Salish Sea Alliance, an organization intended to protect coastal waters.

I had a remarkable conversation with John Anderson who has lived just outside of Sandpoint for 30 years at the northeast corner of Lake Pend Oreille. Railroad tracks run within ¼ mile of his home. In 1989, he initiated the Kalispel history project and followed that with a 10-year effort to bring recognition to the Kalispel people, who were moved out of their homelands into Montana and Usk, Washington. John was also one of the founders of the Panhandle Environmental League in 1982, an organization that disbanded within 4 years after losing every single vote they attempted at the local and state levels. We promised each other to keep in touch to continue our fruitful dialogue. 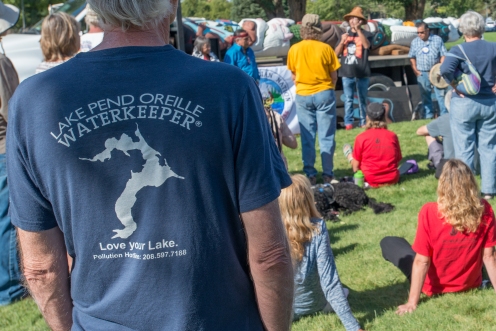 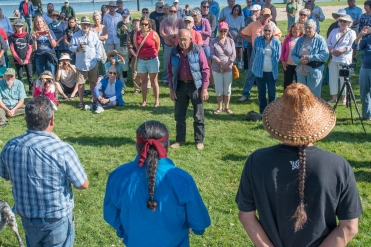 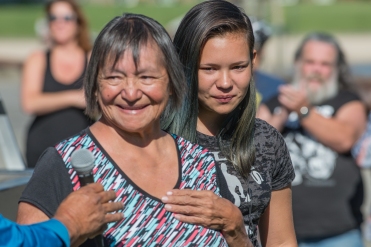 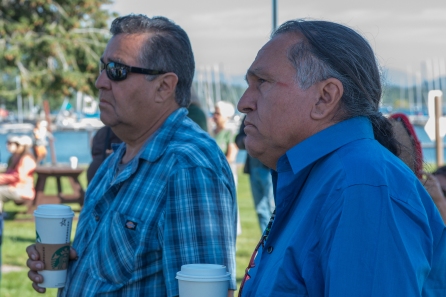 Photo "Ranchers, farmers, and Native Americans discussing impacts to their lands of the proposed Tongue River Railroad" by Beth Raboin
%d bloggers like this: